Cosme was a Nocturnal Person

Central story – shared with my online Transformational Leadership Graduate Level Class at 3 am the morning after a program on “Telling Stories” by Kelly Swanson at the National Speakers Association Convention in Orlando Florida on July 17, 2010.

Cosme was a nocturnal person. Nobody ever saw him in the light of day. This little old wrinkle-faced man with only three teeth was always dressed the same. He wore white pants and sandals. He always had one of those large white Mexican hats and a Serape that looked like it had been through many long nights keeping him warm under the frigid Mexican Sky. 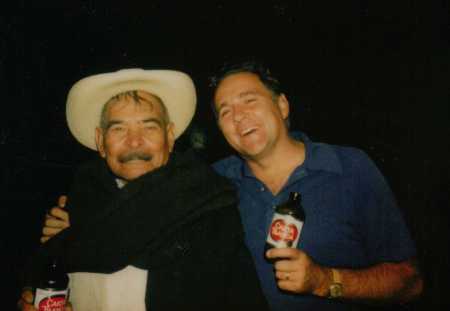 Cosme and my friend Bob Rule

Cosme was the “security guard” at our apartment complex in Guadalajara, when my bride and I were stationed there for Kodak in the late 70’s. The complex was always locked at night as a precaution, so we had to honk the car horn to get in after a night on the town. He sat in a lounge chair by the pool all night long waiting to hear a horn outside the gate. He would jump up and run to the gate to open it for apartment dwellers.

We always tipped Cosme two pesos when we drove in – a practice the hotel manager frowned on because he was thinking we were spoiling the man with such a huge tip. The manager wanted us to give only one peso – which at that time was the equivalent of a nickel. Any time, on any night, raining or not, you could see Cosme sitting out by the pool half hidden under his Serape to keep him warm. When we tipped him, Cosme always muttered some words we could not understand due to his bad teeth. It sounded like Hey mios do venata – muchas gracias. We finally figured out that he was saying “Que Dios lo bendiga – muchias gracias” which means, God Bless You – Thank You in Spanish.

Many times, a buddy from Kodak and I would be out with our wives and come home late at night. At the gate, we would tip Cosme as usual, and our wives would retire for the evening. We had a habit of getting a few beers and cigars and going out by the pool to keep Cosme company. He was always glad to have a beer and smoke and someone to “talk” to. It was very hard to understand the man, but perhaps through many nights and too many beers we finally found the ability to communicate with him. It turns out Cosme had an interesting life.

He had spent his entire life sleeping during the day and working outside for others all night as some kind of watchman. As a boy he would tend goats in the hills, and later he cleaned a fresh-air cafe after the bar closed for the night. Finally, he got the job at Suites Slila as a night watchman. When we were there he was in his 70’s and not in the best of health. But health is in the mind more than the body, and there was nothing wrong with Cosme’s mind.

He would go on for hours about UFOs which he had seen over the years. He firmly believed in these flying visions and knew they were real. Not many people on earth have spent so much time staring at the night sky, so we figured he knew more than us on the subject. He was simply delighted to tell us these stories because everyone else in his life all through the years had kind of looked past the man. Nobody paid any attention to him. He was there, working, but people left him alone unless they needed something.

Cosme was about as poor as you can imagine. I think he only had the clothes on his back and lived in a one room shack with a dirt floor the next block over. One day I saw him in front of his “house” in the morning sweeping the dirt before he retired for the day. He would eat scraps of food left by people from various restaurants and some other simple things he could get for free.

Once our belongings were packed and shipped off to Rochester for our long awaited return trip, we had little left to do at Suites Slila but hand in the keys at the Manager’s Office and put our travel bags in the Taxi for the airport. It was about 10 am, and people were going about their normal day. Just before stepping into the taxi I heard a familiar voice Un – momentito. It was Cosme shuffling up the path with a plastic bag in his hand. I hardly recognized him in the light of day. He shook my hand and looked deeply into my eyes: his had a tear. He said in broken, but understandable English, “Thank you my friend” and handed me the bag with a slight bow. In the bag were two bottles of Tequila, and it was a very good, expensive brand. That must have cost him over two month’s pay. I still have part of the second bottle left after 33 years, and of course I will never finish it because my memory of Cosme can never end.

The point is that we touch the lives of people every day, and we have little idea the impact we are having on people. Don’t look past the people who serve you – they are individuals with high value, and each one has a story to tell.

You cannot fully know the impact you will have on other people!

This entry was posted on Monday, July 26th, 2010 at 11:09 am and is filed under Communications, Enabling Actions, leadership, Teamwork, Trust. You can follow any responses to this entry through the RSS 2.0 feed. You can leave a response, or trackback from your own site.

One Response to Cosme was a Nocturnal Person